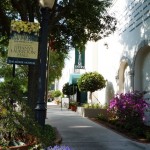 The Morse Museum’s new galleries feature the recently restored Daffodil Terrace and 250 art and architectural objects from Louis Comfort Tiffany’s Long Island estate, Laurelton Hall. This new gallery is huge and features all sorts of information about this estate and how it came to be. There is everything from architectural drawings, to a menu from a dinner party. All of it is fascinating!

The new wing also has a room dedicated to the history of Tiffany, their lives and how the company evolved. It is well worth dedicating an entire afternoon to! And don’t miss the museum shop, a place where you can buy that special momento.

And the best part about the Charles Homer Morse Museum in Winter Park Florida is that it is about a 5 minute drive from Thurston House, our Maitland bed & breakfast.  And it is only one of several reknowned Central Florida Museums.

Friday Nights at the Morse Museum in Winter Park return November 5! During Friday Nights at the Morse, all visitors receive free admission to the galleries from 4:00 p.m. to 8:00 p.m., November through April. Live music, art demonstrations, and family tours are planned for select dates throughout the season. On November 12, classical guitarist Joshua Englert will play from 5:00 p.m. to 8:00 p.m., and at 6:00 p.m. Orlando artist Lee Pharr will demonstrate stained-glass window construction techniques in the Jeannette G. and Hugh F. McKean Pavilion, just behind the Museum. The demonstration includes a free take-home art activity for children, and will be followed at 7:00 p.m. by a family tour through the Museum’s galleries.
This fabulous museum is nearby to our Winter Park area bed & breakfast Thurston House!

Each year, on the first Thursday of December, the Morse Museum helps launch the holiday season in Winter Park when it lights up Tiffany windows in Central Park and presents the Bach Festival Choir, Youth Choir, and Brass Ensemble in concert. This December is the 32nd annual celebration of Christmas in the Park.

The nine leaded-glass windows installed in the park set the stage for a free outdoor concert of seasonal favorites by the 150-voice Bach Festival Choir, one of America’s premier oratorio ensembles.

Eight of the windows are memorials with religious themes produced by Tiffany Studios for the chapel constructed in 1908 for the Association for the Relief of Respectable Aged Indigent Females in New York.

The Association was founded in 1814 by a group of wealthy New Yorkers as a genteel private charity for elderly, indigent women, including widows of soldiers who fought in the War of 1812 and the Revolution. The first residence, constructed in 1838, was an alternative to the common almshouse. An expanded building was designed 30 years later by Richard Morris Hunt, architect to the rich and famous of the late-19th century.

When the residence was threatened with demolition in 1974, Hugh and Jeannette McKean bought its Tiffany chapel windows at the request of the Association board. The windows are memorials to prominent women who it is believed supported the Association in some way. The Association residence is now on the National Register of Historic Places.

Tiffany Studios’ Christmas Eve window, c. 1902, in which a figure resembling Father Christmas holds the Christ child, is also on view at the event and in the Morse Museum following Christmas in the Park. The window was designed by Thomas Nast Jr.—son of the famous political cartoonist—for his sister’s home in New Rochelle, New York.

Christmas in the Park was started by the McKeans in 1979 as a way to share a part of their rare Tiffany collection with the public in an informal setting.

Every year guests at Thurston B&B in Maitland drive the short distance to attend this wonderful event! The massive cross-shaped “electrolier” in Tiffany’s chapel is one of its most powerful elements. Weighing approximately 1,000 pounds and measuring 10 feet in height, this lighting fixture is comprised of cast metal and green turtleback glass. This reconstructed chapel was featured at the 1893 World’s Fair Exibition. This is only one of the magnificiant exhibits awaiting your visit!