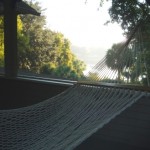 Many guests come to our North Orlando bed & breakfast exhausted and ready for much needed relaxation. Cell phones, laptops and I pads are often left in the car or hidden out of sight in their guest room just so they can experience what true peacefulness is. They usually find their way to our special hidden place, the upstairs sleeping porch. The highlight of this porch area overlooking Lake Eulalia is the wonderful string hammock. Many a guest has fallen asleep as the hammock gently rocks and the sun shines lightly on their faces.

Throwing balls toward a target is the oldest game known to mankind. As early as 5000 B.C. the Egyptians played a form of bocce with polished rocks. Graphic representations of figures tossing a ball or polished stone have been recorded as early as 5200 B.C. While bocce today looks quite different from its early predecessors, the unbroken thread of bocce’s lineage is the consistently common objective of trying to come as close to a fixed target as possible. From this early objective, the basic rules of bocce were born. 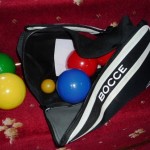 Now that Joe has finished working on our side lawn area, it’s a perfect place to be our bocce court. Book your room, check-in, grab the bocce bag, pick your color and have some outdoor fun at our Central Florida bed & breakfast.